The Swing For A Cure Golf Tournament to Benefit Stand Up To Cancer was a huge success!  The tournament, held on Monday, October 13th, raised $10,000! The Patriot Hills Players Club will donate that amount to Fieldstone Middle School to be included in our overall Dancing With The Teachers annual donation. This is the most we have ever raised on an individual fundraiser  (not including ticket sales for DWTT). 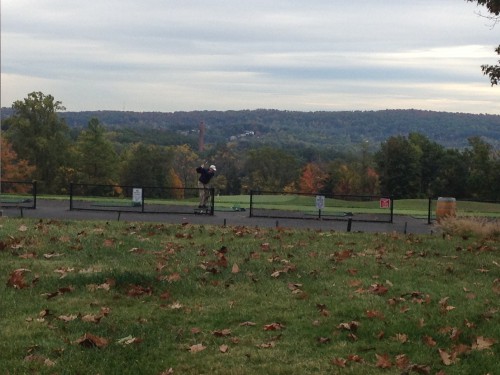 Teeing off at the beautiful Patriot Hills Golf Course

First and foremost, we would like to thank the two event organizers Scott Filor, president of the Patriot Hills Players Club, and Dave Fusco, Golf Pro at Patriot Hills. The original idea to plan Swing For A Cure was theirs. After seeing our Dancing With The Teachers show last year, they were very moved and felt compelled to get involved in raising money for SU2C. They contacted us in May and said that they would like to run a golf tournament to help in our fundraising efforts. We instantly felt connected to their positivity and generosity, so we dove head first into the unknown world of golf tournaments. It turns out we made a great team! 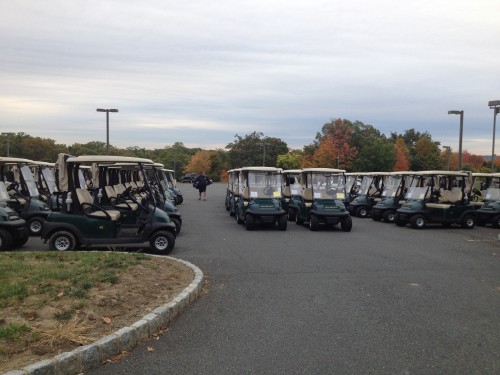 Over 50 carts were ready to roll as golfers swung for a cure.

From the very beginning of the day it was evident that months of planning went into this amazing event. The sight of over 50 golf carts, charged up and ready when the nearly 90 golfers arrived, was  instantly exciting. Before they teed off, golfers bought raffle tickets and Mulligans (for all the non-golfers out there, a Mulligan is an extra shot). 100% of these sales went towards the donation.

Setting off on to the course, the foursomes began their day at different holes. The format of the tournament was a four person team scramble. This, along with the 8-inch cup, provide a very fun element to the game.

Our golfers stop for our paparazzi.

One of the highlights of the day was the putting contest. Three of our SU2C student ambassadors, Riley Schoales, Kylie O’Grady, and Nicole Faleri alongside DWTT volunteer Diane Minnuni  ran this all day long. Players had the chance to putt to qualify for the final round where they had a chance to win $5,000.  Almost all golfers donated at this station for the chance to try, but only nine people qualified for the finals! Unfortunately, the the final putt was not made by anyone, so no one won the $5,000 prize.

We thank our many sponsors who helped raise $10,000 for Stand Up To Cancer

We had many families and businesses sponsor holes and we would like to say thank you for your support and your donation to SU2C. It was wonderful to see all the colorful sponsorship signs at the tee of each hole, and some holes even had two!

After golf ended, and score sheets were handed in, golfers and their families were treated to an awards dinner and three hour open bar. A huge thank you goes out to Incredible Caterers for providing breakfast, lunch, dinner and fantastic service.

Our friend Igor having some fun.

It needs to be said that many businesses also donated prizes for the tricky tray raffles and the silent auction items. These raffles raised a lot of money for SU2C and that could not have been done without the involvement of the local businesses in our community.

Lastly, thank you to all volunteers who helped throughout the day. It was a fantastic event that will become an annual fundraiser.

What We Are All About